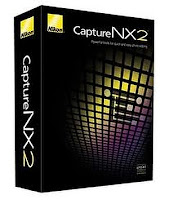 You can download version 2.3.2 of Capture NX2 from your local support site, e.g., Europe, US.

The NEF Codec enables Windows Explorer and certain applications to view NEFs captured with a range of Nikon cameras and can be downloaded from this page.
Note: the latest version of the NEF codec still does not support the D800 or D800E camera (the D4 is supported though)
Posted by Hayo Baan at Tuesday, April 24, 2012