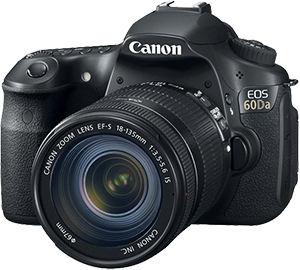 Canon today announced the EOS 60Da, a variant of it's upper entry level EOS 60D. The EOS 60Da is the long-awaited successor of the, in 2005 released, EOS 20Da and is designed specifically for astrophotography. It is built around the same image sensor as the 60D, but has a reworked filter for enhanced transmission of a specific wavelength of red light – 656 nanometers – allowing astronomers and hobbyists to better capture the beauty of the night sky and its “red hydrogen emission” nebulae and other cosmic phenomena.

The Canon EOS 60Da is planned to ship by the end of April at an expected price of $1499 . Sample photos and a comparison with the standard EOS 60D can be found at the Canon Japan website.

To keep the camera powered during long exposures, Canon includes the ACK-E6 AC Adaptor, allowing you to hook up the camera to an AC wall outlet. The optional Timer Remote Controller TC-80N3 can be used to program interval and (long) exposure times without having to touch the camera.
Posted by Hayo Baan at Tuesday, April 03, 2012