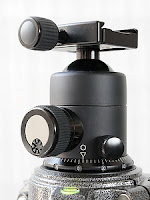 A ball head on a good tripod is a great supporting tool for the photographer. Very flexible and quick to adjust. The better ones you don't even have to loosen when you want to alter them. This can be a boon to the photographer and certainly adds to the precision and ease
of handling.

A good ball head is pretty low maintenance; the very tight space between the different moving parts prevent dirt and other stuff to get in. Just wiping the ball head with a clean (lint free) rag after use is enough to keep it going and operating smoothly for ages. Even when you've used it in adverse weather.

Sometimes, however, you'll notice your ball head isn't operating as smoothly as it should. For instance you'll notice that you need to apply some extra force to start rotate the head on it's base plate. Worse, after you've conquered this initial friction you may even have the head “shoot through” and move further than you intended. This stuttering movement is a real pain when you're using your ball head to precisely follow moving subjects.

In these cases it is likely some dirt (e.g., very fine African dust) has gotten into your ball head anyway and now acts as a small blockage, adding friction where it shouldn't. Luckily there is a solution to this: Just apply a small amount of WD40 to the parts that need smoothing.

For example, my own ball head (a Markins M20) really didn't move smoothly any longer, making it well nigh impossible to properly follow e.g., birds in flight. This was becoming quite a pain. Even before my ball head troubles, I had always wanted to have a can of WD40, but somehow I had never been able to locate a store that sold it. But now I needed it I searched a bit harder and I actually stumbled across it at a very common place: Halfords… It should be for sale at other shops that sell e.g., parts for car and bike repair too though.

Anyway, when I finally acquired the WD40, I immediately applied it to the base plate of my ball head. I then rotated the base a couple of times to get the WD40 distributed internally and already noticed it moved a lot smoother than before. When I looked at the rim just above the base, I noticed a trail of brown gunk, most likely a mix of fine African dust and other stuff. No wonder it didn't operate as smoothly… After wiping the gunk off and applying a bit more WD40 to be sure, testing confirmed I had a smoothly working rotating base again!

When the ball head itself seems to move less smoothly, applying some WD40 to the ball itself will make it run as smoothly as before too.

When you apply WD40, distribute it by moving the parts you want lubricated (e.g., rotate the base plate and wriggle the ball in every direction). You need to use only very little, one short spray usually does the trick. Wipe off any excess fluid, and dirt that came with it, to keep things nice and clean.

Enjoy your smoothly operating ball head!
Posted by Hayo Baan at Monday, May 07, 2012