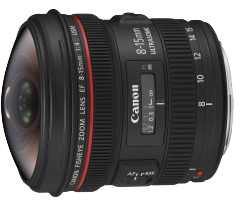 Canon's EF8-15mm f/4L Fisheye USM interchangeable lens has been honoured in Japan with the prestigious Camera Grand Prix 2012 “Lens of the Year Award.” This is the second award for the Canon fisheye lens, which earlier was also named “Best Professional DSLR Lens in 2012” by the Technical Image Press Association (TIPA).

The Camera Grand Prix, considered the most sought-after camera and lens product awards in Japan, is organized by the Camera Journal Press Club, comprising journalists from major domestic photography and camera magazines.