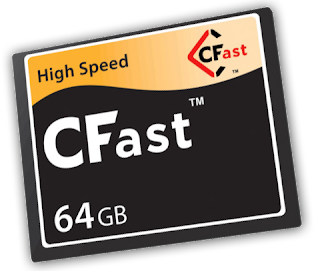 Although Sandisk was one of the co-developers of the new XQD memory card (as used in the Nikon D4 camera and currently only available from Sony and, soon, from Lexar), Sandisk has never indicated they were going to actually develop a memory card for this format. It now becomes clear why: Sandisk chose to adopt a different memory card format altogether: CFast.

CFast is an upgrade of the current Compact Flash memory card and uses a new interface, promising speeds of up to 600MB/s. This will be great news for both the action/sports shooter as well as videographers. Although no actual cards or cameras that support this new format are yet available on the market, Phase One has already indicated they will likely adopt the CFast format in the near future.

I wonder what this new format will bring us and which of the two fast memory card formats will eventually survive: XQD or CFast?
Posted by Hayo Baan at Friday, September 21, 2012